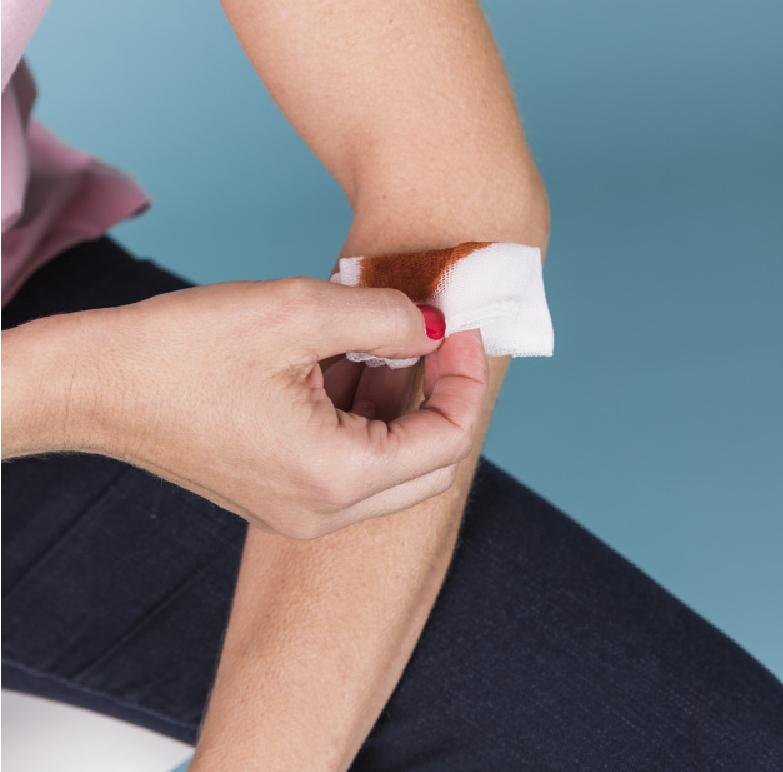 Bleeding is the loss of blood from the vascular systems (including the veins, arteries, or capillaries) whether external or internal. The blood flow in the arteries is under the highest pressure.

For external bleeding, there are a number of different kinds of open wounds:

If you are assisting someone with serious bleeding, you should help to stop or control the bleeding first and then make sure they consult a doctor. In severe cases, call for emergency medical response immediately.

If possible, wear sterile gloves to protect the victim—normal gloves will only protect you.

Apply pressure to the wound with a clean gauze or towel until the bleeding stops. It should take several minutes for bleeding from the veins to stop, while arteries take far longer to clot. Arterial blood spurts and is bright red. Bleeding from the capillaries is very slow and steady, and highly prone to infection, swelling easily. You can use an ice pack above the gauze/towel. Only proceed when the bleeding stops.

Then, wash with water only and clean the area with mild soap and water (do not use betadine/iodine). Touch only gently.

You can apply antiseptic ointment after cleaning. Bactroban and Fucidin are highly recommended. For deeper cuts, you should use betadine/iodine as an antiseptic. Rinse any wound above the heart.

Apply a dressing with only slight pressure.

Check the victim’s nail color—there is a circulatory problem if it takes more than three seconds to recover fingernail color after pressing.

Using a tourniquet is a last resort, but it can lead to amputation. Release every 20 minutes. Only use in uncontrolled severe bleeding.

Serious internal bleeding is most commonly an abdominal injury that may go unnoticed. For mild bleeding, you will see purple bruises, swelling, tenderness around the bruise. You may see blood in the vomit/urine.

Use cold packs in simple cases, but call ∗9999 for emergency if serious (abnormal pulse/difficulty breathing.) Monitor patient and provide reassurance. Control all external bleeding. If the patient is in shock, lie him/her down (on the left side, not right) and elevate the legs.