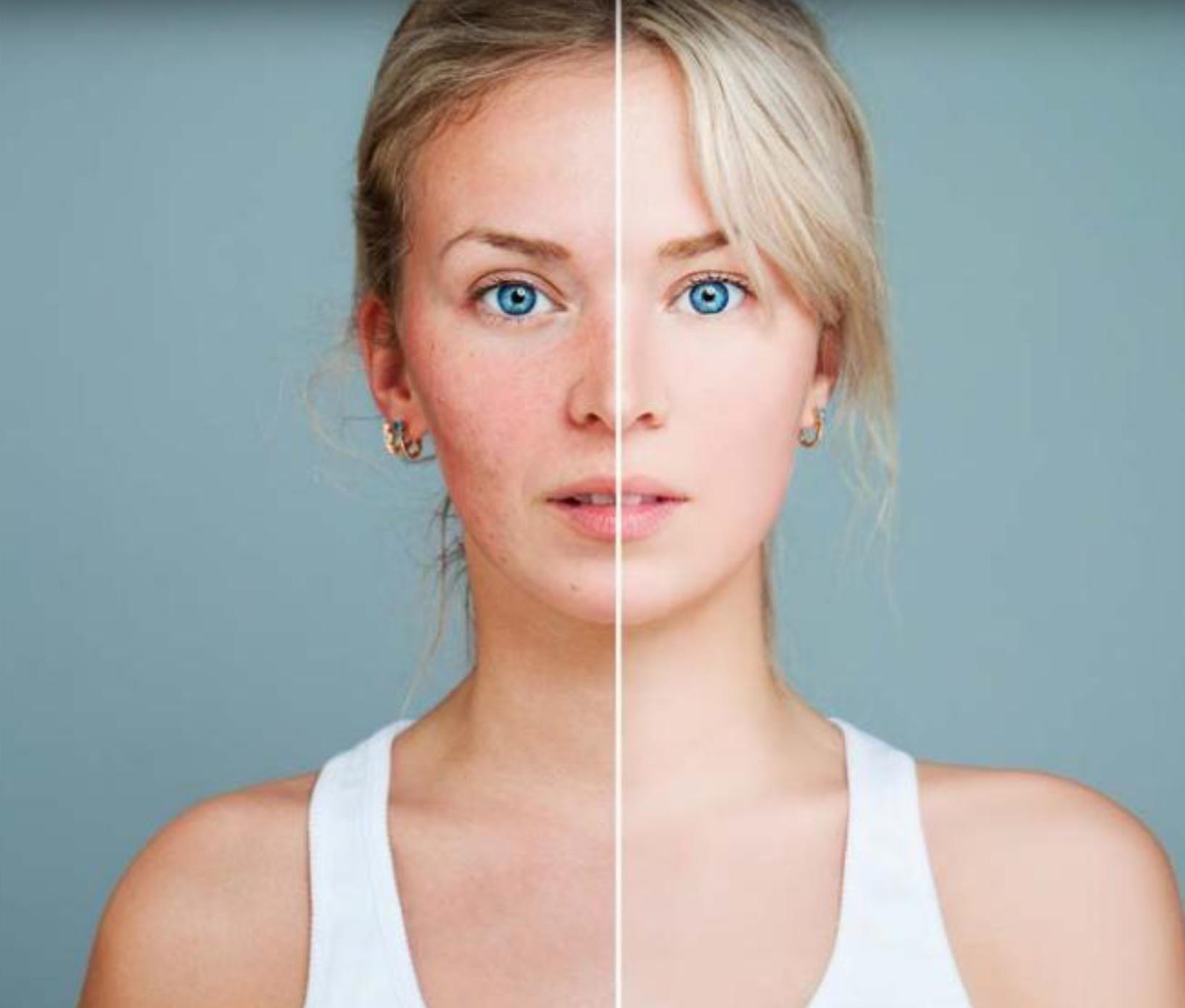 Diseases that affect the face can be very difficult to live with. They can interfere with people’s social lives and even limit the careers of those who need to present a pleasant appearance in public. One particular inflammatory infectious disease of the face affects 1–2% of the population and is predominant in white females. It is known as rosacea, a red irritation of the face that seemingly never goes away by itself.

We’ve had a working definition of inflammation since Roman times. Celsius described tissue as being inflamed when it is hot, red, swollen, and painful. That’s why we describe rosacea as an inflammatory disease, because it gives people a red face that gets redder with blushing, pimples, bumps, and in some cases, an increase in skin volume.

There are four types of rosacea, each of which have their own groups of symptoms. The most prevalent form has the longest name: erythematotelangiectatic rosacea – it’s less severe than the other forms, but it is quite disabling, as these people are always red-faced with visible networks of veins, and it feels hot, tense, itchy and even painful. It gets worse with alcohol, spicy food, heat, and exercise. So the average Anglo Saxon living in Saigon who has rosacea and goes to the gym every day, drinks with friends and eats spicy food will suffer terribly from this condition.

The second most common form is similar, but complicated by the presence of pimples. We call this papulopustular rosacea, because sufferers have red bumps, some of them with white heads, which are called pustules. They can appear all over the face, but typically spare the area around the eyes and the mouth.

The third form, phymatous rosacea, is the one that increases the volume of the tissue in the face – usually the nose, but also other parts such as the forehead, the chin, the cheeks, or the ears. This condition was seen on the famous actor Walter Matthau, who had what we call a “potato nose.” Interestingly, we also see this condition in some paintings of the 16th century. The fourth kind is very uncommon in normal consultations, ocular rosacea, which involves weepy red itchy eyes, more commonly diagnosed in ophthalmologist settings.

The first two types of rosacea are most frequently seen here. Rosacea is most common in white-skinned people, although I have seen it in Asian skin. It is so rare in Asian people that it is often misdiagnosed and treated with steroids, which worsens the condition. In general, it is more prevalent in women than in men.

Most doctors agree that rosacea appears to be a genetic condition that sparks an overreaction to natural irritants (such as a bacterial infection, radiation from light, or heat) in the form of chronic inflammation. Biopsies on skin with rosacea tend to reveal vessels with increased permeability and volume surrounded by cells (especially lymphocytes and mastocytes) that produce high quantities of proteins related to inflammation. We see the same combination of inflammatory cells with asthma and in allergic reactions.

In many people who suffer from rosacea, we find unusually high numbers of saprophytic dust mites (Demodex folliculorum), a small arthropod commonly found in hair follicles. It’s likely that the body’s reaction to this mite is also increased in these people.

There are two approaches to treating rosacea – cosmetic vasoconstrictors and anti-inflammatory medicines. With erythematotelangiectatic rosacea, we focus mainly on reducing the dilation of the vessels, which will make the face less red. The most common treatment is brimonidine; it’s a product that cuts off or closes the vessels, similar to what you might take when you have a cold. A second substance that is starting to prove successful against rosacea is the same medication we use for the nose – otrivin, which contains oxymetazoline, used as a gel or cream rubbed into the face. After applying it in the morning, two or three hours later you will have a much whiter and paler face, and this may last for the whole day.

The problem with this is that there may be a rebound effect. If you close the vessels, you can’t close them forever. At the end of the day, they will open again, and they may be angrier; and perhaps there will be a point when they will no longer respond to this kind of treatment. As of now, we don’t have enough experience to say if this can be a long term treatment.

Another option for reducing redness in the face is vascular laser or intense pulse light (IPL) treatments. These light sources emit wavelengths that mostly affect middle and small-sized vessels, which collapse and make the face appear paler. Some of these devices can also reduce the population of bacteria and mites.

We can medically treat the inflammation itself with antibiotics and antiseptics. One of the classic rosacea treatments is an antibiotic cream called metronidazole; there are other topical treatments and systemic treatments (pills), as well as combinations of both. Some natural plant extracts have also proved effective.

One of the best combination treatments is topical metronidazole and oral doxycycline, although there are many others. Treatments commonly prescribed for acne, such as azelaic acid cream on the skin or oral retinoids for severe cases, are also useful. The biggest therapeutic discovery in recent years has been that ivermectin, an antiparasitic and anti-inflammatory drug, is extremely effective against mites. It is used as a cream, but in Vietnam only oral treatments are available.

What is important to remember in all this is that rosacea is a chronic condition and is not ever going to go away. It’s only natural that patients will hope for a cure, but this is not realistic in this case. Realistically, patients afflicted with rosacea will always be dealing with it to some degree, especially if they are living in tropical climates like this one.

The good news is that with modern medicine, we can manage it effectively and make these patients feel much better. Just because it will always be there does not mean that people should resign themselves to accept it and not fight it. I have seen people who believe that this is part of them. I say to those people, “no – that is not YOU.” You can be different. We can do something for your rosacea. Jump from the cosmetic approach in non-professional hands and see a trained dermatologist, get a diagnosis so that we know what you have, and build a strategy for the short term and the long term that is good for you.