The Business of Medical Evacuation 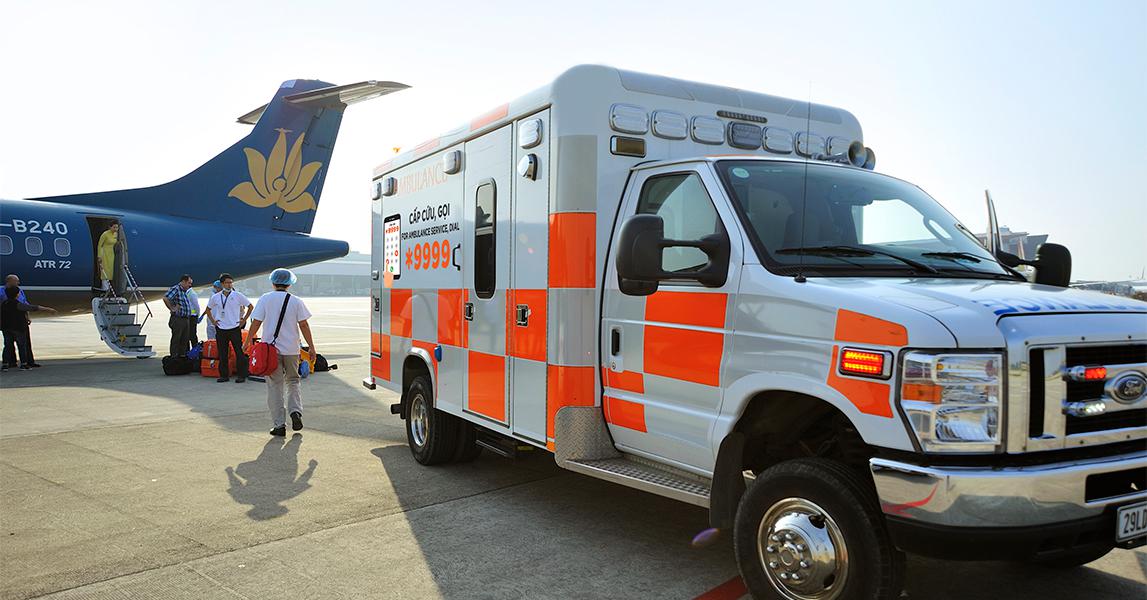 Imagine you’re a foreign tourist who has had the misfortune to fall terribly ill during your visit to Ho Chi Minh City. You’ve been admitted to hospital, you’re lying in the ward, and a team of people wearing white coats arrives to tell you that they’ve come to pick you up and evacuate you to Thailand—where they say you’ll get superior treatment. Before you know it, you’re on an air ambulance touching down in Bangkok, being taken to a facility with a nicer room and a softer pillow. The charge for this transfer to a bed upgrade 750 kilometers away was probably somewhere between $15,000–$20,000.

International evacuation by air is a mega-million dollar industry. According to local air traffic controllers, at least one or more air ambulances enter Vietnam’s airspace every single day. Just as ambulances on the road are given right-of-way in order to save lives, so too do air ambulances enjoy priority clearance at international airports, and Vietnam is no exception. Unfortunately, this safety protocol makes the industry enormously difficult to regulate, and leaves Vietnam open to exploitation by foreign operators who neither pay taxes on their activities stemming from here, nor do any service to this country’s reputation among the international community—who have been indoctrinated to presume that no significant medical procedures are possible in Vietnam; and that if they are, they are too risky.

The fact is that a company can make a lot of money by convincing foreign patients of their need to be transferred abroad for medical treatment, even if that patient does not fully understand why. Most such patients are “evacuated” simply because they have been told by people in lab coats that it is necessary. Local doctors are also offered lucrative referral fees as incentives to recommend patients for medical evacuation, informing the air ambulance operators whenever they have an eligible case.

This “business” is further propped up by the sale of “evacuation cards” to tourists, which pronounces them “eligible for evacuation” if anything happens to them. Even for non-cardholders, regular insurers usually cover medevac expenses anyway. The cases are generally approved by doctors sitting in comfortable offices many thousands of kilometers away who have also been indoctrinated that every case in Vietnam has to be flown out. Why? Because that was what their predecessors believed, and the ones before them, and so on. Why be the one to take the risk and restrict medevac coverage in Vietnam? As a result, this practice continues.

In Vietnam, this industry is largely captured by Thai providers who fly into Vietnam on a daily basis to perform a service on Vietnamese territory without being asked to declare earnings on those activities, and therefore paying zero tax here. Millions of dollars that should have been submitted to Vietnam for many years by a company that operates here nearly every day remain unpaid. This also serves to perpetuate the impression overseas that almost any traveller who falls ill in Vietnam somehow needs a medevac.

Some of the pickup teams are extremely ill-equipped. In one case, a Thai air ambulance doctor came to our clinic to collect a reassessed patient, carrying a blood pressure machine purchased from a Boots pharmacy! A patient wired to everything imaginable, and she came with over-the-counter equipment and claimed “this is now my patient”. Last month, a Thai team was kicked out of a hospital in Danang for being under-equipped, unprepared, and without any prior understanding of the case.

The legality of such teams working in Vietnam, even for short periods of time, is highly questionable. Few of the cases they deal with are REAL emergencies. Genuinely life-threatening emergencies are usually rejected by air ambulance providers for a myriad of reasons, usually none of which are actually related to health risks. The list of do’s and don’t’s seems to be very clear in the world of medical evacuations. In this region, air ambulances obviously prefer to fly only the non-risky cases.

The industry of air ambulances is abusing Vietnam. It sours our reputation abroad and flouts our tax laws. Local medical providers should block the surrender of their patients to unlicensed foreign operators, and evacuations should be performed by local companies that are already regulated by the Vietnamese administration. There are enough local providers here who have the knowledge, experience, and expertise to perform these transfers safely while putting the interests of the patient first, not those of foreign businesses who deliberately breed fear among international visitors, damaging our reputation for the sake of profit.